For fun, and no profit.

Check out the GitHub archive here.

A bunch of DIY fan made translations for old video games, made by me and Johan Sånesson (Robobengt). These translations were originally created between 1999 and 2002 as a sort of technical archeology work. We delved deep into the innards of our old favourite games and poked around using various tools such as hex editors to see what was possible. This was good fun and we learnt a lot! During these final years of the 20th century retro games were not all that retro yet, at least not the games we were interested in. They were still in a sort of limbo, not quite old and not quite new, not yet re-released on new platforms, but not available in stores either. The major pixel art movement and indie games explosion were yet to happen on a larger scale. 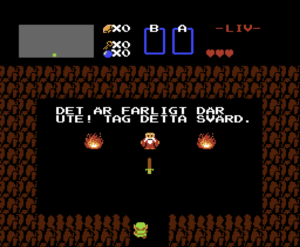 We were avid gamers and general computer enthusiasts, programming and making web sites and such, so the leap to poking around in compiled game roms was not that big for us. There were plenty of people around the internet – with much more talent than us – who made tools, hacks and translations, so finding information was easy. The games we chose were favourites of ours, but not as complex as new CD-ROM productions of the time. The niche we chose was translating to Swedish, since we knew that well and not that many others were doing it.

We used to have a (not so) fancy web site at Emucamp, but it has not been available for many years. It can still be viewed at the internet archive if you want to peruse some internet history, but all the important files and instructions are available at GitHub as well.

Some of these translations are featured over at Romhacking.net.

Surprisingly we were also mentioned in an academic paper some years ago.

The tool of choice for editing back in the day was the almighty Hexposure, now evidently rewritten for “modern” systems, and Tile Layer Pro for editing graphics and fonts. But I’m certain there are hundreds of new cool tools nowadays 🙂

A few of our favorite sites back in the day were Zophar.net, Emucamp and Emulation.net.

Even though I did not use Git (or any VCS for that matter) back then, I have set the commit dates to the actual modification dates of the files involved. This is to keep an accurate record, and to preserve a small piece of our shared digital heritage. For the same reason I have left the text files in their original form, but also made markdown versions for easier reading, sometimes with a few comments added.